How Many CFA Charterholders are there in the World?

CFAs are in high demand as major investment houses prefer to hire CFA charterholders in their asset management and research divisions.

But do we have an actual number of CFA Charter holders around the world, and what do they do? Let’s take a look.

In FY2017, the countries with the most number of CFA program administrations were:

The CFA Institute does not disclose the number of CFA charterholders by country. However, we understand that 95% of CFAI members have the CFA charter, and you can make a rough estimation based on that.

Please note that for countries with strong growth in CFA exam candidates, the percentage of Charter holders among all CFAI members are likely lower, because there are more candidates (vs charterholders) in the pool. We will cover this in more detail below.

North America still represents the region with the most members. The second region is Europe at 16%, follow closely by Asia at 15%. Asia is experiencing the highest growth (44% of CFA candidates are from Asian countries) and therefore it is expected to become the number 2 regions in the near future.

Here is the growth of total CFA exams administered in FY 2017: 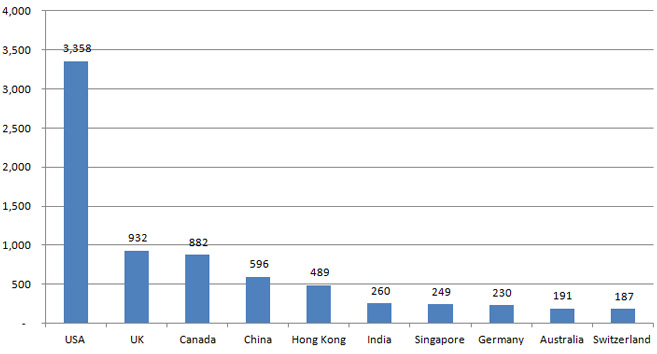 To learn more about the information on CFA, go to our frequently asked questions page:

CFA or CPA: Which Qualification is Better?

CFA Exam Results: How to Understand Your Score Report