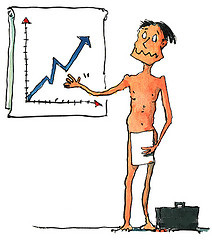 To an outsider, investment banking league tables could mean a lot of things. For bankers especially banking analysts, we know the “truth” when we shamelessly tweaked the charts to ensure our firm stay in top 3 in any league tables…

… then when I switched to work for my client I realized that the CEOs didn’t give a damn about these rankings.

Anyway, if you are still interested in league tables, here are the charts based on the raw data from Thompsons Reuters.

To address the issue of manipulation I mentioned above, the investment banking ranking shown here is based on fees generated instead of deal size. In my opinion, fees generation is a more accurate measurement of a firm’s profitability and success. The following ranking is based on first quarter 2014 results. 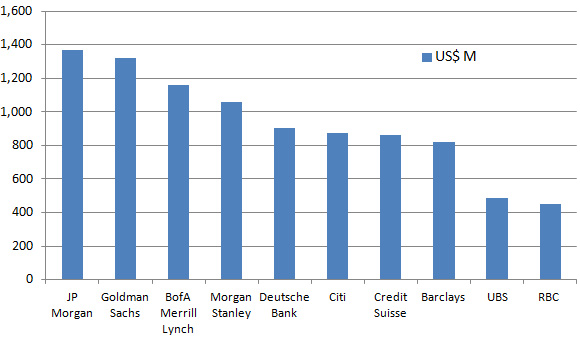 JP Morgan was the forerunner in the investment banking league tables. The bank was all-rounded securing the top 3 positions in M&A, equity and bond offerings. Goldman did well especially as a M&A house, since it traditionally serves the biggest and more high profile clients. Merrill Lynch took the third place doing relatively well in all three areas.

The disappointment this quarter was Morgan Stanley. It ranked among the top 3  in M&A and equity, but its poorer ranking in bond dragged down the overall performance. 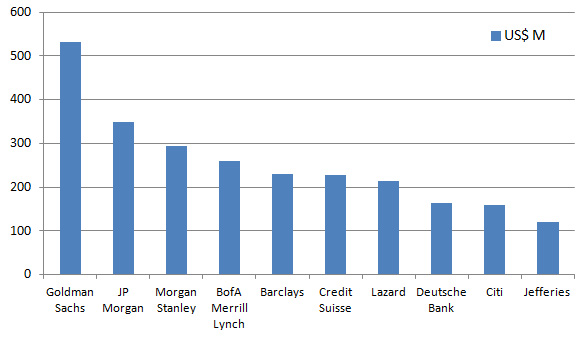 Goldman Sachs was the clear leader, earning 53% more than its closest competitor so far in 2014. 64% of its business came from the Americas, 20% from Europe and 14% from Asia. The generated fees increased by 34% from last year. JP Morgan had a great quarter earning 60% more than 1Q2013.  70% of business came from the Americas and 17% from Europe. Morgan Stanley dropped to number 3 as its earning dropped slightly by 1% when compared to last year.

All 10 firms except Morgan Stanley and Citi experienced growth in the M&A business compared to last year. The overall earning increase among the top 10 was 7%. 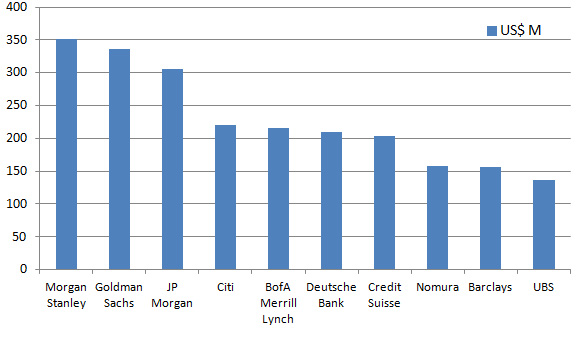 Morgan Stanley topped the chart earning $352 million from equity offerings this quarter. 57% of fees came from follow-on offerings, 27% from IPOs and 16% from convertibles. Goldman Sachs and JP Morgan followed closely behind with similar breakdown.

The top 10 earned 21% more in equity offerings when compared to the same period last year. However, the performance within the top 10 varied greatly, from -20% in BofA Merrill Lynch to +70% in Nomura. 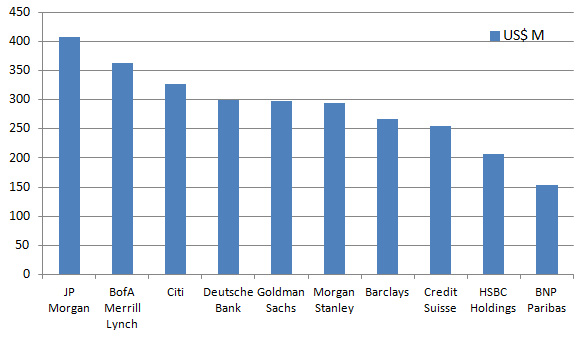 The performance was more even distributed in bond offerings. JP Morgan ranked number 1, earning more than $450 million in the first quarter of 2014. The other diversified firms with big balance sheet, such as BofA Merrill Lynch, Citi and Deutsche Bank, also did well.

Having said that, bond offering earnings of the top 10 fell by 20% when compared to last year. The market sentiment was not favorable for bond offering and all banks registered a fall in this category.