If you are contemplating on taking CFA exam, you might want to gauge the difficulty by looking at historical CFA pass rates. Here are the passing rate trends of the three levels, as well as my analysis of what we can learn from these CFA statistics.

Since the CFA exam is now computerized, the exam schedule has now changed permanently. Starting in 2021, there are now two to four testing windows per year for each exam level. This makes the breakdown of current statistics a little different from historical statistics. Here’s a chart of how the data look. (The 2022 CFA exam pass rates aren’t available yet.)

Overall, 138,206 candidates took the CFA exam in 2021, and 47,872 passed for an overall pass rate of 34.6%. However, pass rates for one testing window still haven’t been released. So, we’ll update this page and provide more analysis once all the 2021 numbers are in and again when the 2022 CFA exam pass rates are released.

These are the latest CFA passing rates for the last five years for which data are complete. There are two data points for each Level 1 exam because up through 2019, CFA level 1 was given twice a year, while Level 2 and 3 were held once. However, in 2020, the pandemic forced a postponement of all CFA exams, and Level 1 was only offered in December.

What’s the trend if we go back further?

Here’s a quick comparative overview of CFA pass rates in the last ten years, ending in 2020. For the 2021 numbers so far, please see the chart above. Again, we’ll re-evaluate the 10-year pass rates when we have the November 2021 numbers. 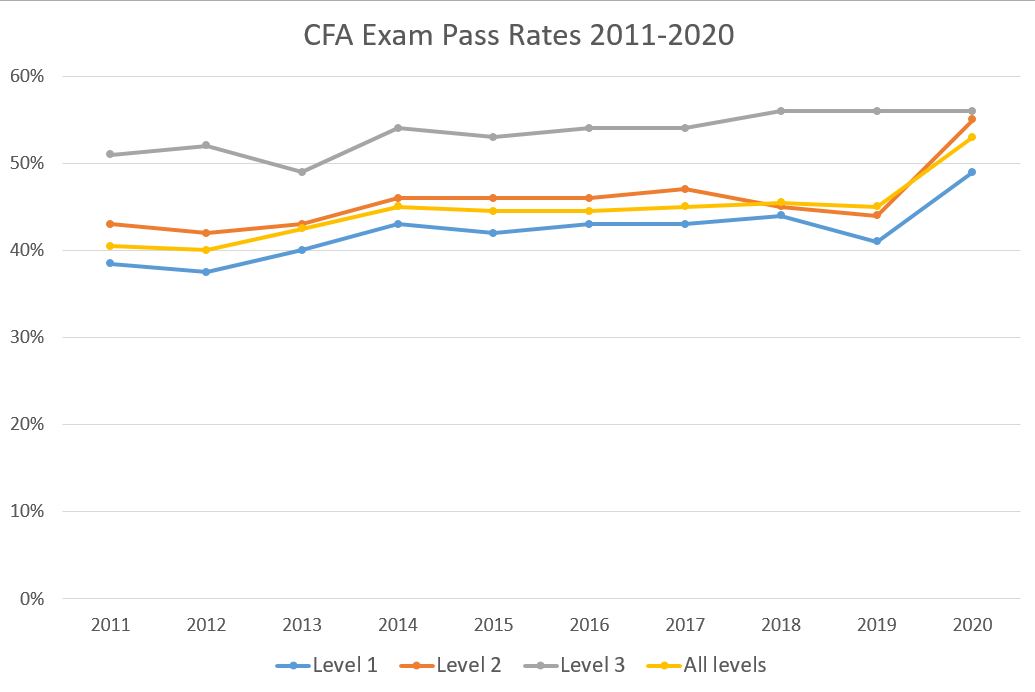 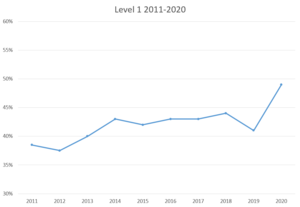 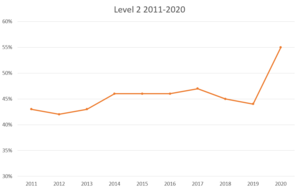 The 10-year weighted average of CFA level 2 passing rate is 45%, a bit higher than the CFA Level 1 passing rate. Once again, the 2020 scores represented a large increase in the passing percentage of CFA candidates. It’s possible that the Covid-19 pandemic allowed candidates more time to study for the exam, but there could be other factors at play, as well. Once again, fewer candidates took the Level 2 and 3 exams in 2020 than in previous years. 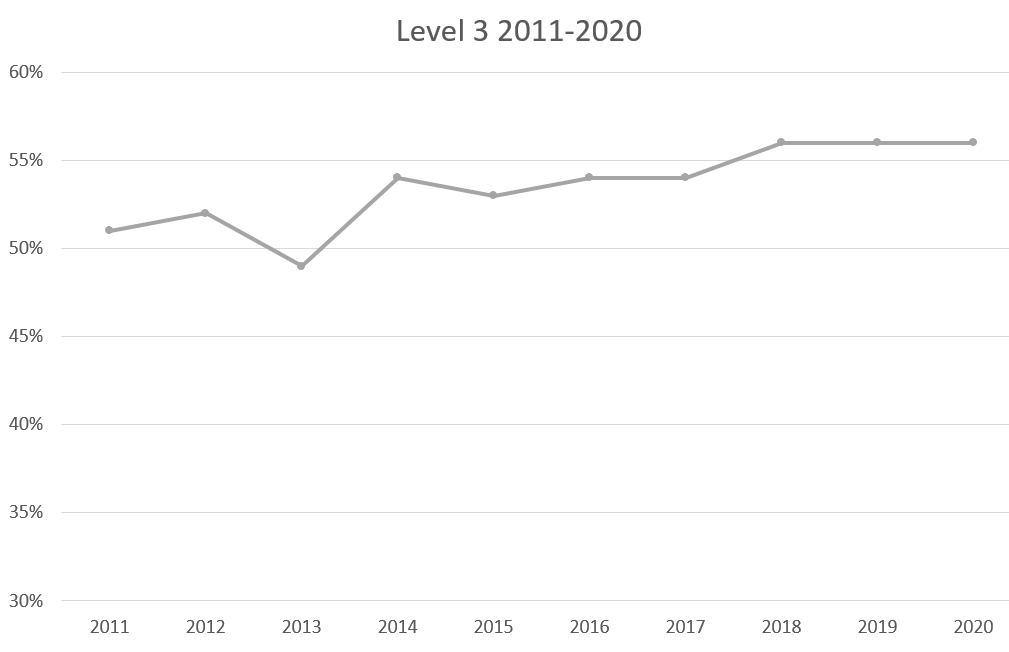 The 10-year weighted average pass rate for Level 3 is the highest at 54%. Unlike with the other two levels, this percentage in 2020 remained consistent with the past few years.

Drop Out and Completion Rates

Since the CFA exam is multiple-tier (i.e., you need to pass one level to move on to the next), it is useful also to look at the dropout rates to see how many candidates can complete the program at the end. Although specific data on completion rates are difficult to find, we can make some good estimates of the overall CFA success rate by looking at how many candidates take each level of the exam. 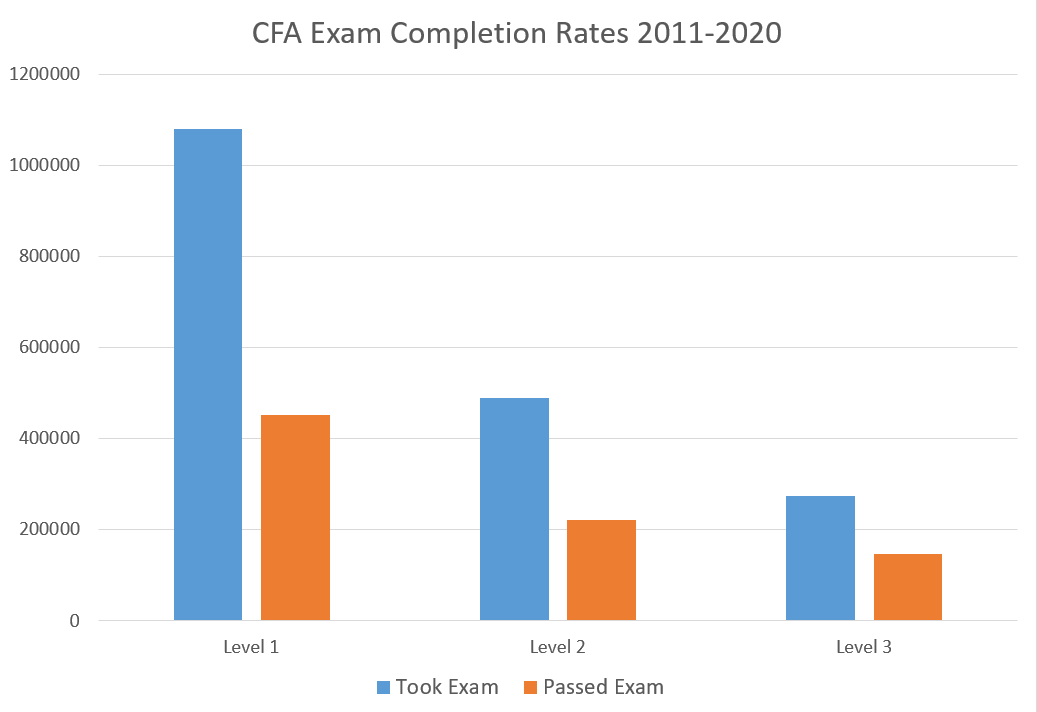 What We Can Learn from These CFA Stats

Looking at a longer time frame (since inception in 1963), we see an overall declining trend in pass rates in all three CFA levels. At the same time, pass rates increase as candidates advance to Levels 2 and 3. Interestingly, it is only in the past 15 years or so that pass rates have begun to stabilize. Here is my attempt to explain these trends.

As you can see from the chart, there has been an exponential increase in candidate numbers since the mid-1990s, matched by an equally significant decline in pass rate during the same period. The correlation is especially high in the Level 1 exam.

Here is my explanation: the only prerequisite to be a CFA Level 1 candidate is a bachelor’s degree. The low barrier of entry attracts many casual exam takers who just want to give it a try without properly studying for the exam. These people never pass Level 1, and therefore you don’t see them advancing to become a CFA Level 2 candidate, and even fewer advance to Level 3.

The CFA exam used to be the test for professionals already working in fund management and sell-side equity research. Nowadays, many candidates come from related but different fields such as accounting, investment banking, and even unrelated fields such as IT, legal, and support staff.

These candidates may be smart and capable, but their lack of previous education and work experience in the investment field inevitably pulls down the passing rate.

At the same time, the candidate pool is increasingly diverse in terms of geography. Ever since CFA exams welcomed non-US candidates by offering non-US exam sites, the applications from Europe and Asia skyrocketed. China has experienced the fastest growth, and Chinese exam sites now have the greatest number of candidates.

These candidates may have the necessary financial knowledge, but English may not be their first language. The fact that the CFA exam is offered only in English may affect the pass rate in non-English-speaking countries.

The CFA Institute does not publish CFA pass rates by country, but the CMA exam shows a pass rate that’s split by geographic location. You will see that for non-English speaking regions (the Middle East and to a lesser extent Asia Pacific), the pass rate is much lower. This means the ability to understand and write using the English language is critical for passing these exams.

3. Is the Exam Getting More Difficult?

This has been a popular theory among aspiring CFAs. It is not easily measurable, but it’s fair to say that the investment product has become more complex and sophisticated in the past 10 years.

CFA focuses on traditional investment theories and thus is less affected than the CAIA exam, but I am sure some elements of alternative investments are introduced and tested in the current version of the exam.

4. How about this Conspiracy Theory…

Lastly, I’d like to throw in this conspiracy theory that has gotten quite popular: CFA Institute purposely manipulates the passing score. Why? They can increase the number of retakes and the amount of revenue from the exams.

While this is an interesting theory, an unreasonably low pass rate for the CFA exam will have an opposite effect: it may increase the drop-out rate as people give up after Level 1. Ultimately, this would decrease the total number of CFA charter holders, which isn’t a good thing for a professional association.

Therefore, I tend not to agree with this theory, but it’s worth pointing out for the sake of discussion.

Here is a summary in video format, though it contains some older data.

How to Increase Your Own CFA Exam Pass Rate

Candidates need 6 to 12 months to prepare for each level. It is important to try your best to pass the first time! Learn how to pass CFA Level 1 and go from there.

The best way to achieve this goal is to pick a review course that suits your background, schedule and learning style:

If you just got the news of failing the exam, don’t despair. Remember that CFA pass rates have always been low. There are actionable steps that you can take to greatly increase the odds of passing.

Strategy to retake the exam

3. For Candidates with Analytical Minds

Here is everything you need to know on the CFA exam results, including insights on score bands, fail bands (the “Band 10”), minimum passing score, borderline cases, and more.

Learn about the CFA grading system

What are the CFA exam pass rates by country? Who has the highest CFA historical pass rates?

Unfortunately, there are some questions we just can’t answer because the CFA Institute chooses not to publish the data. We can’t tell you the CFA passing percentage in India or the CFA pass rates from Canada because we only have the numbers for all test takers combined.

The CFA and CPA exam pass rates are a little difficult to compare head-to-head because of how they’re structured. The CFA exam has three levels of increasing difficulty, while the CPA Exam has four sections corresponding to different topics. Both tests often extend over several years, as well. However, here’s our best comparison for 2018, which is the latest year for which we have complete data for both exams.

In 2018, 85,855 candidates took at least one section of the CPA Exam. Of those, 24,034 passed their final section of the exam, meaning that they passed the whole test. Here are passing rates by exam section:

Although it’s not a direct comparison, there is enough data to conclude that more people take the CFA exam, but a higher percentage of test-takers pass the CPA exam.

What is a passing score on the CFA exam?

As you probably know, the CFA exam is graded on a pass/fail basis. Thus, you will not find out exactly how many questions you answered right or wrong, only whether or not you passed. The exact number of correct answers that constitute a pass varies from year to year, and the CFA Institute doesn’t release this number. CFA charterholders and the Board of Governors meet to determine the minimum passing score about six weeks after the Level 1 and 2 exams take place. However, the Level 3 score takes longer to determine because of the essay component.

Because of the secrecy that surrounds the process and the variation of the number, it’s best not to fixate on the number of questions you must get right. Besides, no one’s score report contains this statistic. You won’t know whether you barely passed or answered every question correctly. Instead, focus on preparing for the exam as best you can.

What is the CFA fail rate?

To calculate the failure rate, you simply subtract the passing rate of CFA from 100. That means that over the past 10 years, an average of 55% of candidates have failed at least one level of the CFA exam.

2022 CFA Exam Fees Breakdown: Is the CFA Worth It?