CAIA Exam Difficulty vs CFA Based on 3 Comparisons

Apart from the general comparison between CAIA vs CFA, how can we differentiate the two in terms of difficulty? Is CAIA necessarily the easier test? Let’s look at some hard data as well as feedback from candidates.

At least for now, the CAIA Level 1 exam has a much higher pass rate when compared to CFA Level 1:

This is possibly due to the fact that CAIA is more recently established and the examiner may intentionally set the bar lower to build up the membership. As you can see from the chart, the rate is trending lower as the designation becomes more established.

On the other hand, the CFA Level 1 pass rate is stabilized at around 40%: 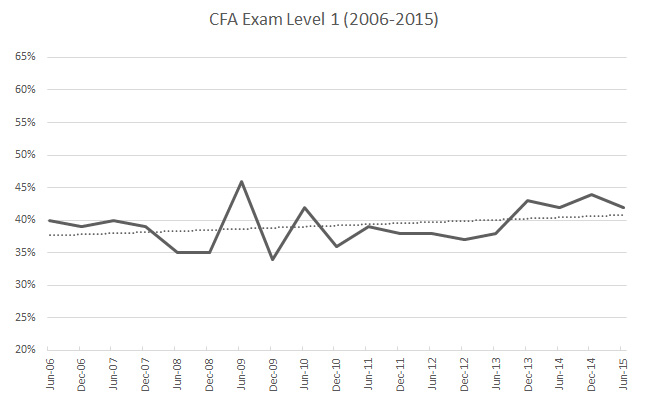 CAIA Exam Difficulty Based on Curriculum

It is safe to say that the exam content is a lot broader in CFA.

The CAIA qualification consists of two-tier exams while the CFA has three tiers. The CAIA materials cover a niche industry (alternative investment) vs CFA which covers the much broader finance and investment industry.

It is interesting from this linkedin conversation here that many candidates find the two exam equally difficult, but the fact that CAIA level 1 covers a lot less materials make the test easier to handle. Here are some of the comments:

The level of difficulty of the material is probably very similar, the volume is just a lot less, so less to remember!” ~ Nicholas Millikan, CFA, CAIA

I wrote CFA level 1 in 2002 and I think CAIA level 1 in 2008, but kept studying various financial disciplines in between those years. During the exam, I thought they were about equal in difficulty, but that is largely background dependent. I’m also an accountant, which made the CFA exam bearable, and took lots of stats and portfolio management courses, which made CAIA bearable. The material in CFA level 1 is very broad in scope and shallow in breadth – need to know the major points about a lot. CAIA level 1 did have some very interesting quantitative techniques and I found the material to be much more interesting than CFA level 1. But yes, as I’m sure you’ve heard, the commitment time is less for CAIA as it’s more specialized.” ~ Tan Tran

200 hours of study time for CAIA L1 is typical although it can be less depending on study techniques and so on. When many people say that CFA L1 is slightly more difficult, who can say that it will be the case for you (except yourself)? For me, the key has always been passion. Which one are you more passionate about? Which one will bring you more benefits (at work and personally)? Which one do people around you (bosses or clients) value more highly?”

2022 CFA Exam Fees Breakdown: Is the CFA Worth It?